Musical director Jon Ouin explains the process of composing the music for Sawdust. 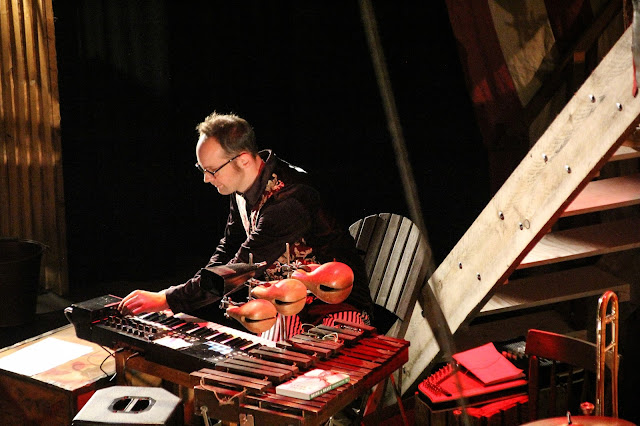 When we think of the sound of the circus, a whole range of colourful musical instruments and noises instantly spring to mind.

All the music you hear in Sawdust is based on the creative ideas and input of Crisis clients over a series of musical workshops. Any ideas for vocal hooks or instrumental melodies, percussive rhythms - or even just a general sense of how the music should feel in terms of style and atmosphere - were captured as we went along and thrown into a large melting pot of musical ideas using laptops, phones and scraps of paper.

One of our first tasks was to settle on the kind of musical instruments which we could use which were practical (as in, not a full-sized calliope organ, for example) but which could still create the right musical atmosphere.

Nearly all the characters in the play had a song - or a ‘suggestion’ of a song - written into the script at one point or another. At these points, it’s a real opportunity for the audience to enter the headspace of, say, Pierrot or Lena, to scratch beneath the surface and encounter their ‘inner voice’, perhaps a bit of their backstory and their aspirations for the future.

So we started by reading through these short pieces of text, maybe chopping them up and playing around with the emphases. We quickly discovered that thanks to the way the words were written, they had a kind of inbuilt, poetic rhythm which lent themselves to certain musical styles or sounds. Another approach was to record noises which we might associate with that character (the sound of bottles or metallic clunks, for example) which could then be used as samples to be triggered by the performers.

Over the course of the music workshops, we worked hard to represent each character’s traits and quirks, and give them a kind of musical identity, all within the framework of the specific, wonky world of the Viva Vintage circus contained in the script.

Posted by Arts at the Old Fire Station at 15:13